The Dow theory is a trading approach developed by Charles H. Dow for technical analysis.

Charles H. Dow believed that the stock market is a reliable measure of overall business conditions within the economy. By analysing the overall market, one could accurately understand favourable and unfavourable conditions and identify significant market trends and the likely direction of individual stocks.

As per Charles Dow, there are three categories of market movement, also known as market trends. The first and most important is the primary trend which is significantly longer in time duration. The second and most distorted is the secondary trend which is shorter in nature than the primary trend. The third, and usually based on Intraday traders, is the daily movement, also known as market noise which lasts for a day to a week.

This is the market’s major trend that lasts from a year to several years. It indicates the broader direction of the market. In the world of investing, we also call primary trends a bull market or a bear market, depending on the movement. The primary trend can go either way. If the Primary trend goes down, then we say it’s a bearish trend, and if it goes upward, we call it a bullish trend. Only long-term investors or swing traders are interested in this trend. The primary trend also shows the performance of the large business listed on the stock exchange and can be called a barometer of the whole economy. 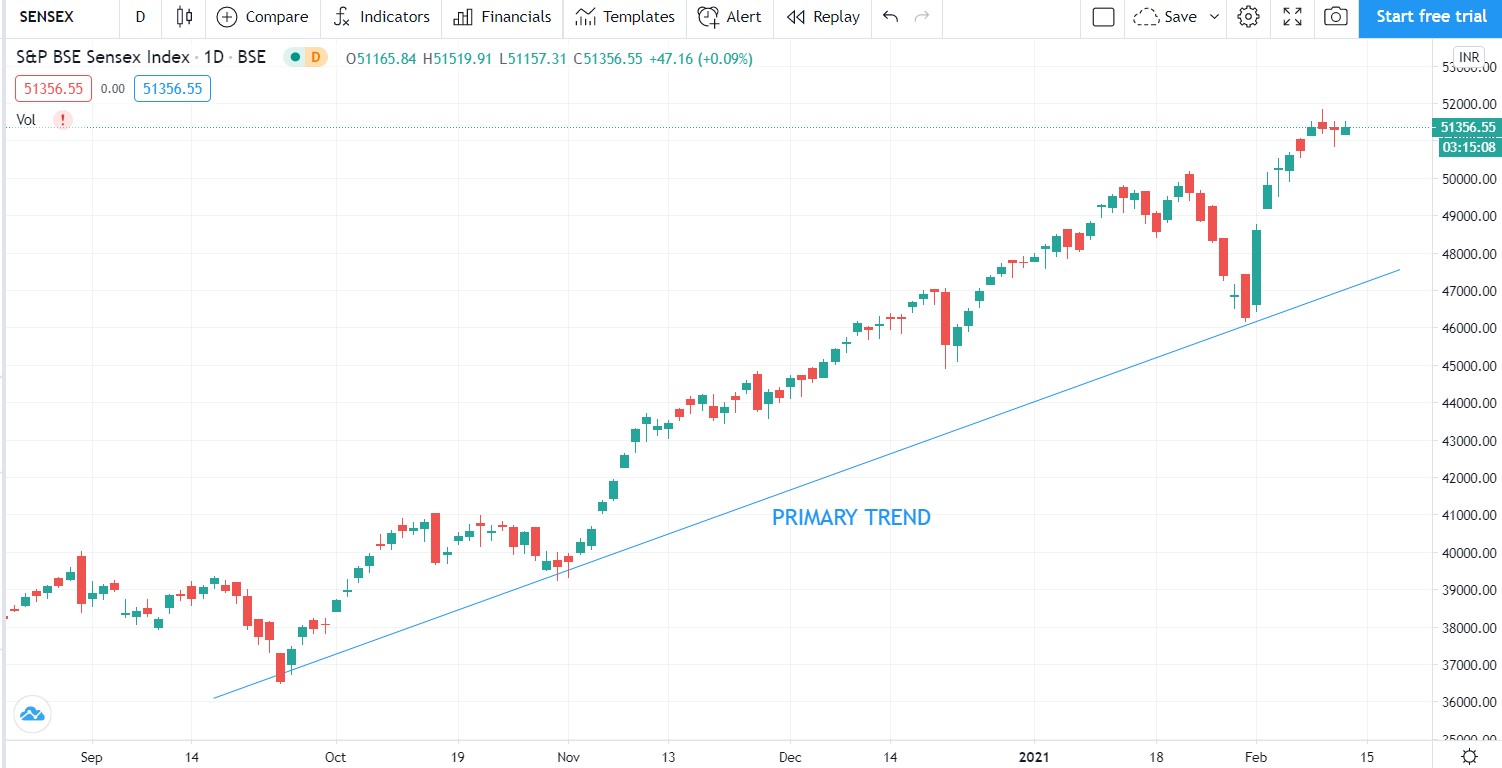 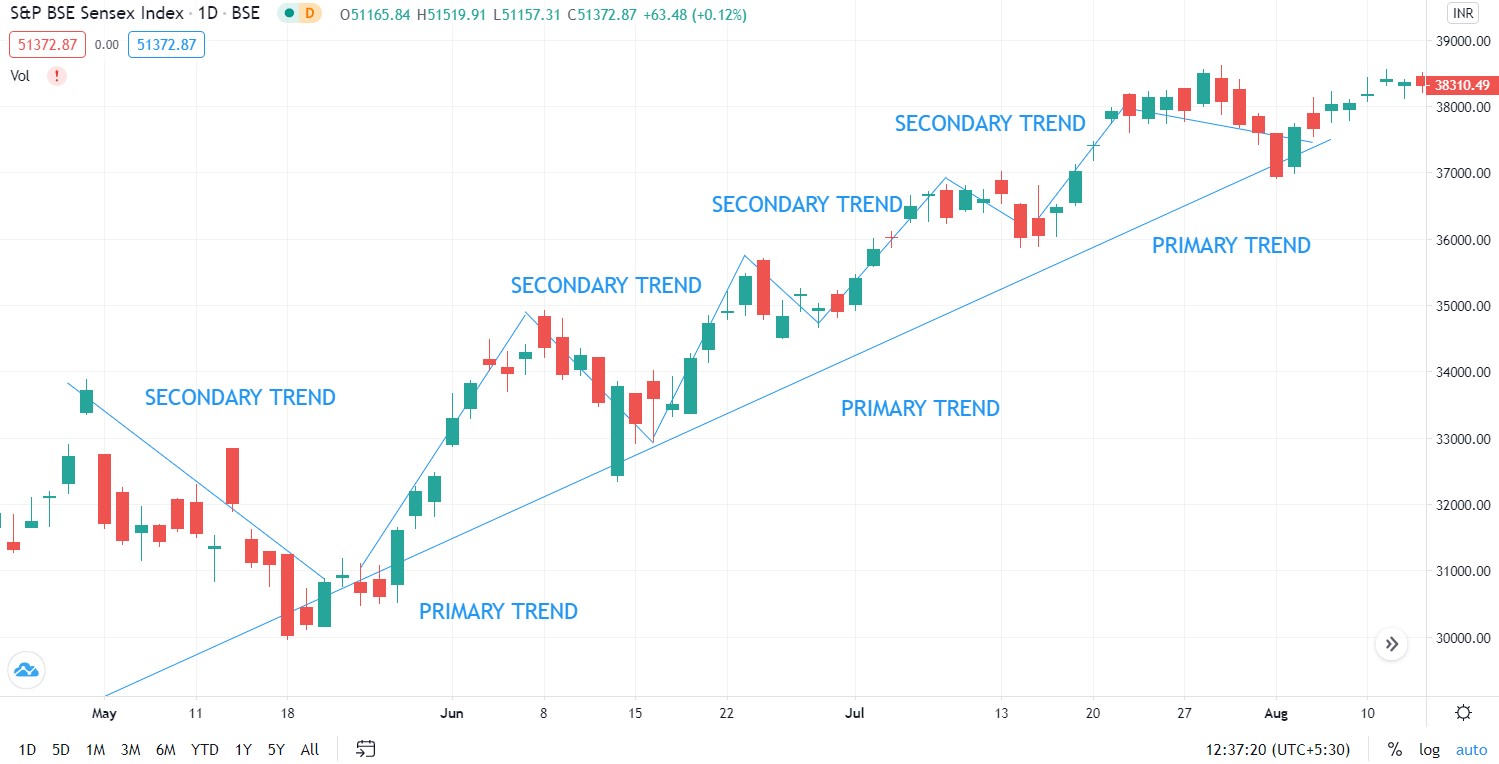 Minor trends are day-to-day fluctuations in the market. Minor trends are short-term speculative movements that are totally irrelevant and often ignored. Most of the time, they are news-related and can be considered noise.

Why do we have minor trends? The answer is straightforward! Since the stock market offers a platform to trade in a security every day, then in the search for quick money, most intraday traders trade every day.

The second assumption is that the market reflects all available information. Everything there is to know is already reflected in the markets through the price. Prices represent the sum of all the hopes, fears, and expectations of all participants. Interest rate movements, earnings expectations, revenue projections, presidential elections, product initiatives, and all else are already priced into the market. The unexpected will occur, but usually, this will only affect the short-term trend. The primary trend will remain unaffected.

The Dow theory operates on the efficient markets hypothesis (EMH), which states that asset prices incorporate all available information. In other words, this approach is the antithesis of behavioural economics.

Earnings potential, competitive advantage, management competence—all of these factors and more are priced into the market, even if not every individual knows all or any of these details. In more strict readings of this theory, even future events are discounted in the form of risk.

The third assumption is that all indices must confirm with each other. We cannot confirm a trend based on just one index. For example, the market is bullish only if CNX Nifty, CNX Nifty Midcap, CNX Nifty Smallcap, etc., all move in the same upward direction. It would not be possible to classify markets as bullish just by the action of CNX Nifty alone. All the large, medium and small capitalised stock indices must move in the same direction.

If there is an increase or decrease in prices with very low volume, then it is clear that a particular group of investors is manipulating the price.

It should be noted that in the world of finance and investment, volumes mean the number of shares traded during the day.

Brief History of Charles H. Dow as per Wikipedia:

Charles Henry Dow was an American journalist born in Sterling, Connecticut, on November 6, 1851. He co-founded Dow Jones & Company and The Wall Street Journal, which has become one of the most respected financial publications in the world. He also invented the Dow Jones Industrial Average as part of his research into market movements. He developed a series of principles for understanding and analysing market behaviour which later became known as the Dow theory, the groundwork for technical analysis.